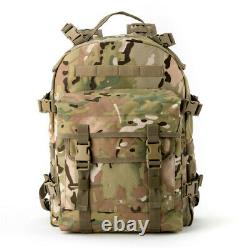 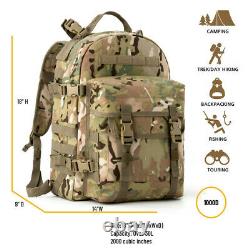 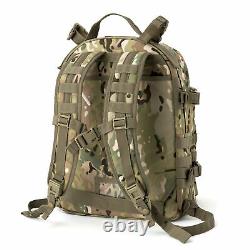 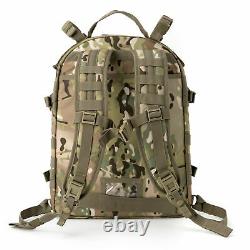 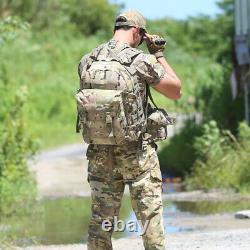 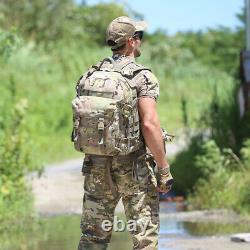 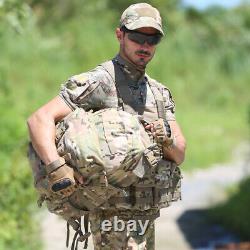 T MOLLE II Assault Pack. The main compartment and the front pocket is capable of being secure closed using slide fasteners, The exterior of the Assault Pack have PALS webbing used to mount modular pouches. Adjustable padded shoulder straps and an adjustable webbing hip belt, used to carry the pack. It has webbing straps on the exterior used to compress loads carried and attach the pack on the MOLLE II Large Rucksack Pack, and has an internal Radio pocket capable of accommodating the single Channel Ground Airborne Radio. The top of the MOLLE II Assault pack have a handle to aid in carrying when not worn on the back and two access ports used for routing antennae or similar sized equipment out of the main compartment.

There is a user name tag pocket design on the assault packs back. Meanwhile it has a means of allowing water to drain out. T MOLLE II Tactical Assault pack equipped with MOLLE Quick-release Buckles so that the military users can move move very faster or whatever dump the Assault Pack when in emergency situation. Meanwhile, the inside has the Hydration system design which allow users put the bladder in and the Tube exit hole. MOLLE II is an integrated, modular load-carrying system designed to enhance the capability and lethality of the modern Soldier.

MOLLE II is designed to have different configurations that allow Soldiers to tailor their equipment to meet specific mission needs. T Tactical Assault Pack (TAP) is made from part of MOLLE II parts. T Rifleman Assault Backpack is widely used among military users because of its reasonable size and volume, which suit for 3 days (72 hours) field missions. Meanwhile, its PALS attachment MOLLE webbing design allows different kind of utility MOLLE pouches and waist pack or sleep mat to be attached, meanwhile it can also be combined with MOLLE large Rucksack for long time mission or survival games.

MOLLE PALS Webbing allow Modular Pouches attach. MT Rifleman Tactical Assault Pack used the newest version of YKK zippers, which helps the pull action much smoother and protect the military stuffs inside the bag in a better way as well.

MT MOLLE Tactical Backpack is used in different range of fields, and its Multicam Camouflage makes the backpack integrate into the most of environment condition quickly. Meanwhile, it has Hydration System Design with a Bladder Tube Hole Exit on the top of pack so that you can also carry the mission without stopping if necessary. The most obvious benefit of using a waterproof fabric is that it keeps your belongings safe from any damage that maybe caused by water. In general, waterproof military backpacks are safe for mountaineering, camping and any other activity that involves a lot of water crossings or unexpected dunking. UTX Duraflex Buckles are famous as original U. S national molding products, especially it is widely used in military field, not only in military loading carrying equipment , but also in other army and navy tools. T MOLLE Assault Pack adapted 100% UTX Buckles as main part brace function to make sure user's carrying to be firm and steady.

Is one of the leading suppliers of military & outdoor camping products in China. We are specialized in designing, fabricating and exporting goods to countries in all over the world.

Thank you for shopping at our store! The item "Molle II Rifleman Military Assault Pack Army Tactical Backpack Multicam" is in sale since Wednesday, October 14, 2020. This item is in the category "Collectibles\Militaria\Surplus\Personal, Field Gear\Bags & Packs". The seller is "akmaxgear" and is located in Edgerton, Kansas.

This item can be shipped to North, South, or Latin America, all countries in Europe, Japan, Australia.