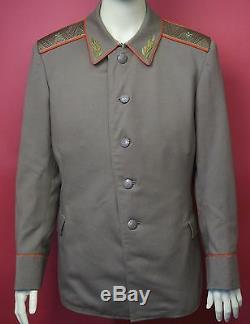 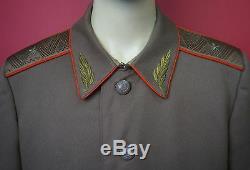 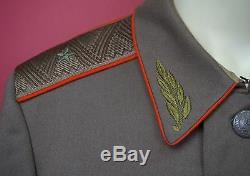 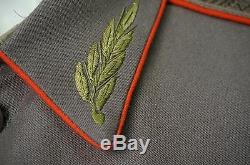 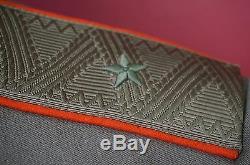 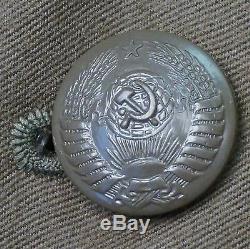 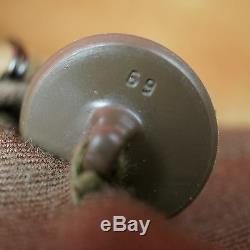 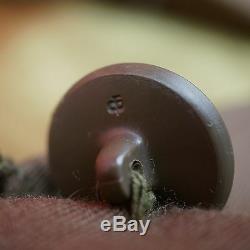 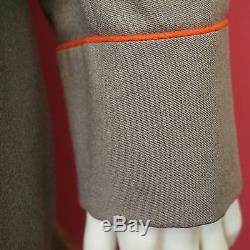 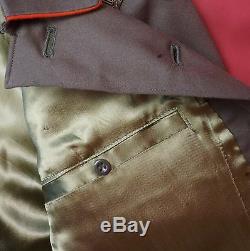 Field Tunic of a Major General in the Soviet Army (Land Forces). GUARANTEED 100% ORIGINAL Soviet era piece made exclusively for a General officer in the Soviet Armed Forces, not a recent replica! This very distinctive single-breasted tunic is made in olive green wool gabardine.

Features closed collar, olive drab plastic buttons, subdued embroidery on lapels, red Army piping on the collar and cuffs. The buttons are dated "69" on the back. This is an interesting detail: plastic buttons with Soviet state seal could only go with this specific type of uniform which was introduced by a Defense Ministry decree in 1972.

This means that the details such as buttons had been prepared long in advance to make a quick transition possible after the change in regulations. Olive green shoulder boards are piped in red and have embroidered olive drab stars. There is no identifying factory tag which is not uncommon for uniforms of this type.

The quality of the uniform and features such as stiffener material in the collar and cuffs allows to assume that it was custom tailored, not mass produced. Chest size 46 with a 27 sleeve length from seam to cuff. The tunic is in VERY GOOD CONDITION.

The tunic is crisp and immaculately clean; we couldnt find any of the usual moth damage, spots or wear. Some wrinkles in the bottom part may disappear with corrct ironing. There are traces of badges that were worn on it, but these are not very noticeable and certainly not detractive in any way. There is minimal amount of soiling to the liner material under the collar but the liner is sound and fresh overall.

Introduced in 1972, uniform of this type was in use for only a short time: in 1987 the "closed collar" field tunic for Soviet generals was replaced with a more modern and practical jacket with cargo pockets. This early type was used during much of the Soviet war in.

This is a great item to add to your Cold War collection! The item "Soviet Army General FIELD TUNIC Jacket 1972 Model USSR Uniform Afghan War LARGE" is in sale since Friday, June 5, 2015. This item is in the category "Collectibles\Militaria\Surplus\Uniforms & BDUs".

The seller is "collectrussia" and is located in Tenafly, New Jersey. This item can be shipped to United States.